Our medical system is sometimes as much a sham as our political system. Really! 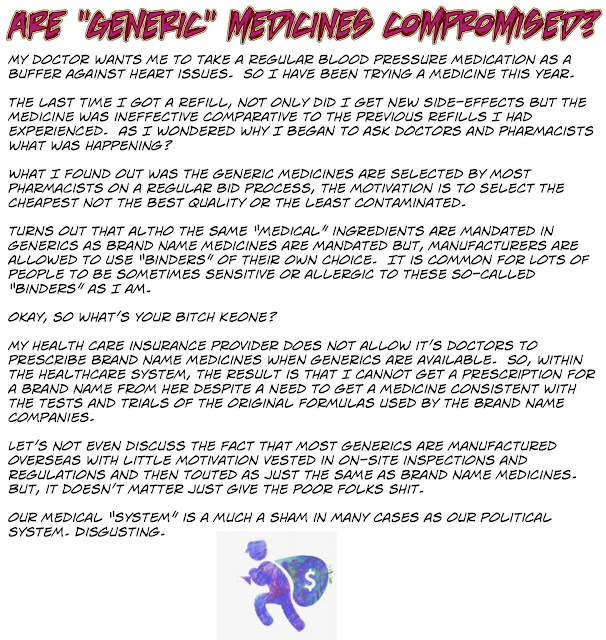 Posted by Keone Michaels at 12:58 PM No comments:

A Doctor Speaks Out About Ageism In Medicine

A Doctor Speaks Out About Ageism In Medicine

Society gives short shrift to older age. This distinct phase of life doesn’t get the same attention that’s devoted to childhood. And the special characteristics of people in their 60s, 70s, 80s and beyond are poorly understood.
Medicine reflects this narrow-mindedness. In medical school, physicians learn that people in the prime of life are “normal” and scant time is spent studying aging. In practice, doctors too often fail to appreciate older adults’ unique needs or to tailor treatments appropriately.
Imagine a better way. Older adults would be seen as “different than,” not “less than.” The phases of later life would be mapped and expertise in aging would be valued, not discounted.
With the growth of the elder population, it’s time for this to happen, argues Dr. Louise Aronson, a geriatrician and professor of medicine at the University of California-San Francisco, in her new book, “Elderhood.”
It’s an in-depth, unusually frank exploration of biases that distort society’s view of old age and that shape dysfunctional health policies and medical practices.
In an interview, edited for clarity and length, Aronson elaborated on these themes.

Q: How do you define ”elderhood”?
Elderhood is the third major phase of life, which follows childhood and adulthood and lasts for 20 to 40 years, depending on how long we live.
Medicine pretends that this part of life isn’t really different from young adulthood or middle age. But it is. And that needs a lot more recognition than it currently gets.
Q: Does elderhood have distinct stages?
It’s not like the stages of child development — being a baby, a toddler, school-age, a teenager — which occur in a predictable sequence at about the same age for almost everybody.
People age differently — in different ways and at different rates. Sometimes people skip stages. Or they move from an earlier stage to a later stage but then move back again.
Let’s say someone in their 70s with cancer gets really aggressive treatment for a year. Before, this person was vital and robust. Now, he’s gaunt and frail. But say the treatment works and this man starts eating healthily, exercising and getting lots of help from a supportive social network. In another year, he may feel and look much better, as if time had rolled backwards.
Q: What might the stages of elderhood look like for a healthy older person?
In their 60s and 70s, people’s joints may start to give them trouble. Their skin changes. Their hearing and eyesight deteriorate. They begin to lose muscle mass. Your brain still works, but your processing speed is slower.
In your 80s and above, you start to develop more stiffness. You’re more likely to fall or have trouble with continence or sleeping or cognition — the so-called geriatric syndromes. You begin to change how you do what you do to compensate.
Because bodies alter with aging, your response to treatment changes. Take a common disease like diabetes. The risks of tight blood sugar control become higher and the benefits become lower as people move into this “old old” stage. But many doctors aren’t aware of the evidence or don’t follow it.
Q: You’ve launched an elderhood clinic at UCSF. What do you do there?
I see anyone over age 60 in every stage of health. Last week, my youngest patient was 62 and my oldest was 102.
I’ve been focusing on what I call the five P’s. First, the whole person — not the disease — is my foremost concern.
Prevention comes next. Evidence shows that you can increase the strength and decrease the frailty of people through age 100. The more unfit you are, the greater the benefits from even a small amount of exercise. And yet, doctors don’t routinely prescribe exercise. I do that.
It’s really clear that purpose, the third P, makes a huge difference in health and wellness. So, I ask people, “What are your goals and values? What makes you happy? What is it you are doing that you like best or you wish you were doing that you’re not doing anymore?” And then I try to help them make that happen.
Many people haven’t established priorities, the fourth P. Recently, I saw a man in his 70s who’s had HIV/AIDS for a long time and who assumed he would die decades ago. He had never planned for growing older or done advance care planning. It terrified him. But now he’s thinking about what it means to be an old man and what his priorities are, something he’s finally willing to let me help him with.
Perspective is the fifth P. When I work on this with people, I ask, “Let’s figure out a way for you to keep doing the things that are important to you. Do you need new skills? Do you need to change your environment? Do you need to do a bit of both?”
Perspective is about how people see themselves in older age. Are you willing to adapt and compensate for some of the ways you’ve changed? This isn’t easy by any means, but I think most people can get there if we give them the right support.

Q: You’re very forthright in the book about ageism in medicine. How common is that?
Do you know the famous anecdote about the 97-year-old man with the painful left knee? He goes to a doctor who takes a history and does an exam. There’s no sign of trauma, and the doctor says, “Hey, the knee is 97 years old. What do you expect?” And the patient says, “But my right knee is 97 and it doesn’t hurt a bit.”
That’s ageism: dismissing an older person’s concerns simply because the person is old. It happens all the time.
On the research side, traditionally, older adults have been excluded from clinical trials, although that’s changing. In medical education, only a tiny part of the curriculum is devoted to older adults, although in hospitals and outpatient clinics they account for a very significant share of patients.
The consequence is that most physicians have little or no specific training in the anatomy, physiology, pharmacology and special conditions and circumstances of old age — though we know that old people are the ones most likely to be harmed by hospital care and medications.
Q: What does ageism look like on the ground?
Recently, a distressed geriatrician colleague told me a story about grand rounds at a major medical center where the case of a very complex older patient brought in from a nursing home was presented. [Grand rounds are meetings where doctors discuss interesting or difficult cases.]
When it was time for comments, one of the leaders of the medical service stood up and said, “I have a solution to this case. We just need to have nursing homes be 100 miles away from our hospitals.” And the crowd laughed.
Basically, he was saying: We don’t want to see old people; they’re a waste of our time and money. If someone had said this about women or people of color or LGBTQ people, there would have been outrage. In this case, there was none. It makes you want to cry.
Q: What can people do if they encounter this from a doctor?
If you put someone on the defensive, you won’t get anywhere.
You have to say in the gentlest, friendliest way possible, “I picked you for my physician because I know you’re a wonderful doctor. But I have to admit, I’m pretty disappointed by what you just said, because it felt to me that you were discounting me. I’d really like a different approach.”
Doctors are human beings, and we live in a super ageist society. They may have unconscious biases, but they may not be malicious. So, give them some time to think about what you said. If after some time they don’t respond, you should definitely change doctors.
Q: Do you see signs of positive change?
Absolutely. There’s a much larger social conversation around aging than there was five years ago. And that is making its way to the health system.
Surgeons are thinking more and more about evaluating and preparing older adults before surgery and the different kind of care they need after. Anesthesiologists are thinking more about delirium, which has short-term and long-term impact on older adults’ brains. And neurologists are thinking more about the experience of illness as well as the pathophysiology and imaging of it.
Then you have the age-friendly health system movement, which is unquestionably a step in the right direction. And a whole host of startups that could make various types of care more convenient and that could, if they succeed, end up benefiting older people.
Posted by Keone Michaels at 10:47 AM No comments:

Some Pu-pu for starts!

1.)  Making money from the aging boom!